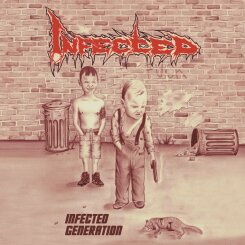 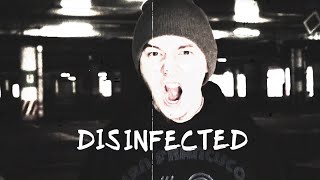 INFECTED – pioneers of Ukrainian Death Metal scene – The inception - A young band from Kiev sprung into existence on 10.10.91 under the INFECTED monicker. Initially more hardcore oriented, the band gradually shifted towards more extreme styles of music, while cementing their original line-up: Yaroslav ‘Poruchik’ Rempinsky – guitar Vitaly ‘Pryga’ Prygunov – drums Vladimir ‘Pooh’ Yatsenko – bass Dmitry ‘Fuck You’ Artemenko – vocals Thi first year was the band’s preparation time, taking a lot of experimenting with styles, building new material, recording demos while playing several local gigs. January 1993 INFECTED hits Kiev KOMORA studios to record their first ever demo single, ‘Surrounded by Infection’. This song, along with two live performances filmed in June 93 during ‘Jamix-Show’ in Ukraine Palace became sources for three respective videos produced by Anatoly Vekslyarsky and TV Megapol. Within a year of heavy rotation as part of ‘Jamix’ TV show these videos give the band a very good promotion. A the peak of the ‘first wave of fame’ Dima ‘F… You’ parts ways with the band, to be replaced by Alexander ‘GRN’ Tynkievich. With further addition of Sergey ‘Bronya’ Bronovitsky on guitar duties the line-up was finally established. The band’s style underwent significant changes as well, transforming into a powerhouse of Death/Grind. Before recording their debut LP Infected participate in several fests (the 10-th ADEM anniversary in Kiev, Terrorizer Fest in Vinnitsa, Thrash-Mania 93 in Lugansk, Nuclear Rain in Kharkiv), they do a solo gig in Kiev, and tour Ukraine. The footage from some of these gigs was used to make two live videos produced by TV Megapol. In January 1995 INFECTED begin recording their first LP, ‘Infected Generation’ at the DZZ Studios (House of Recordings, Kiev). The work was done by June, and the band proceeded to look for publishing company. Finally they decided to approach their friends, George Dementiev and the CORE shop, who published the debut cassette album. The 1000 copies (a modest number by that time) were sold out in no time, and the album is still considered a rare gem among the fans. The band continued to stay active in the metal underground, further solidifying their status as leaders of Ukrainian metal scene. Failing to adhere to band’s internal discipline, ‘Bronya’ decides to jump ship while no replacement was hired. A year later Alexander ‘GRN’ (who often substituted for the missing guitar players during rehearsals) finally added rhythm guitar to complement his vocal duties. Another axe player who was sometimes seen filling in the second guitarist shoes was Dmitry ‘Maloy’ Maksimets of the CRUSADER fame (another famous band of the time). He was a good friend of the band and aside from joining the line-up during tour gigs (Ternopol, Vinnitsa, Kiev, Minsk) also added guitar solos and keyboards during ‘Infected Generation’ recording sessions. ‘Maloy’ also assisted the band as a sound engineer both in studio and live situations. At some point, due to internal clashes, the bassist ‘Pooh’ leaves the band. Although, still remaining a good friend, ‘Pooh’ continues to fill the bass duties for some time. In 1997 the band hires a new gun to their line-up, Alex ‘YOZH’ Babansky to fill the bassist shoes. Although, a year later, after departure of Yaroslav ‘Poruchik’ Rempinsky Alex grabs the guitar instead, while Aleksey Prusov becomes the band’s new bass player. Both musicians were well-known in the local scene for a number of underground projects. The new line-up started to generate new material and brought changes to musical style. The more thrashcore/grind oriented ‘Disinfected’ set was stage-tested during gigs in Kiev and other Ukrainian cities. Some of the live recordings of that period were later released as a split album with Japanese UNHOLY GRAVE. Despite the highly interesting new material being forged in the band’s ovens, the new album’s recording still failed to take off. The band was actively seeking labels to sign a recording/publishing contract with but none were offering. The suggested split albums with Grenouer (RU) and FSFI (CZ) were put down by the band as their original intent was to record a full-blown LP. - ANABIOSIS - By the end of 1998 Vitaly Prygunov resigns from his drummer post due to family matters. Failing to find a replacement, the band suspends all activity. After the only resurgence in 2002 which saw the band playing a single gig to celebrate CORE Shop founder’s George Dementiev anniversary, INFECTED officially enters the cryostasis to slowly drift in their slumber amidst the ever-changing reality. – WAKING UP- In 2010 the INFECTED beast shows first signs of life – first rehearsals, getting back into shape, unfreezing line-up and recapturing the spirit. 2011 sees the band rehearse on a regular basis; the new set-list is in the works, which includes tracks from various years. Alexander ‘GRN’ Tynkievich decides to concentrate his efforts solely on guitar playing, therefore the band starts looking for a new front-man. Several months of experimenting with female vocals brought no desired results, at least as far as music was concerned. The search was over when Yuri Savchenko (of Revolt and Provocateur fame where he fulfilled multiple duties on vocals, guitar and bass) was hired to abuse the microphone. In 2012 INFECTED signs a contract with local label Metal Scrap Records to re-issue the ‘Infected Generation’ album on a CD with remastered original recording and a slightly retouched sleeve design. The CD hit the shelves on April 29, 2012. Currently the band is getting geared up for a studio session to record fresh versions of a number of their back-catalogue hits, including the early ‘Surrounded by Infection’ set of 93, and the later ‘Disinfected’ set of 97. The subsequent CD album resulting from these recording sessions is the band’s nearest target. Current line-up: Yuri Savchenko – vocals, guitar Yaroslav "Poruchik" Rempinsky – guitar Vitaly "Pryga" Prygunov – drums Discography: "Video '93" VHS 1993, Megapol TV "Infected Generation" MC 1996, Core Production INFECTED/INNERCELL "Live at Zelena Perlyna Festival" Split-MC 1997, self-released INFECTED/UNHOLY GRAIVE (Jap) Split-MC 1997, D.A.C. Productions "Infected Generation", re-mastered, CD 2012, Metal Scrap Records INFECTED – pioneers of Ukrainian Death Metal scene 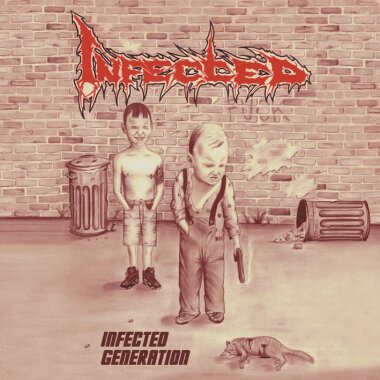